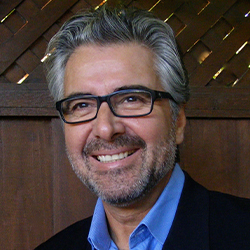 Gil Zamora is a Justice Studies and Forensic Sciences lecturer, working in eyewitness memory and practicing forensic art. He received his Master’s degree in Education from San José State University, and his Bachelor’s, from National University, in Behavioral Sciences.

Gil retired as the Police Artist for the largest police agency in Silicon Valley in 2011. He has interviewed over 3,000 eyewitnesses and was instrumental in solving some of the most heinous crimes in the Bay Area. He has testified as an expert witness numerous times, and his sketches have led to hundreds of suspect identifications. Gil is a member of the International Association for Identification, Forensic Art discipline, and has lectured on his forensic art practices.

After retirement from law enforcement, Gil was featured as the forensic artist in the highly acclaimed marketing campaign:
The Real Beauty Sketches (2013). Gil showcased his unique forensic art techniques in a way that brought about real discussions about how women saw themselves. The sketch results were dramatic, and the video was viewed over 100 million times worldwide, bringing attention to self-perception and the idea of real beauty.

Gil was invited to be a speaker at the Talks at Harvard event in 2018, where he spoke about best practices for forensic artists and the issues of eyewitness memory contamination. Gil served on the Santa Clara County Grand Jury in 2015 and was asked to serve as the foreperson in 2016. As the foreperson, Gil was instrumental in leading the efforts to produce a report that focused on the county detention system and the conditions of mental health services for inmates.

Gil continues to focus his study on the reliability of eyewitness memory, during sketch artist interviews, and how they may be affected by different forensic sketch interview methodologies.

Gil is committed to engaging the forensic science and law enforcement community to foster new academic research on best practices for all forensic artists around the country.