Transforming the Way We Teach 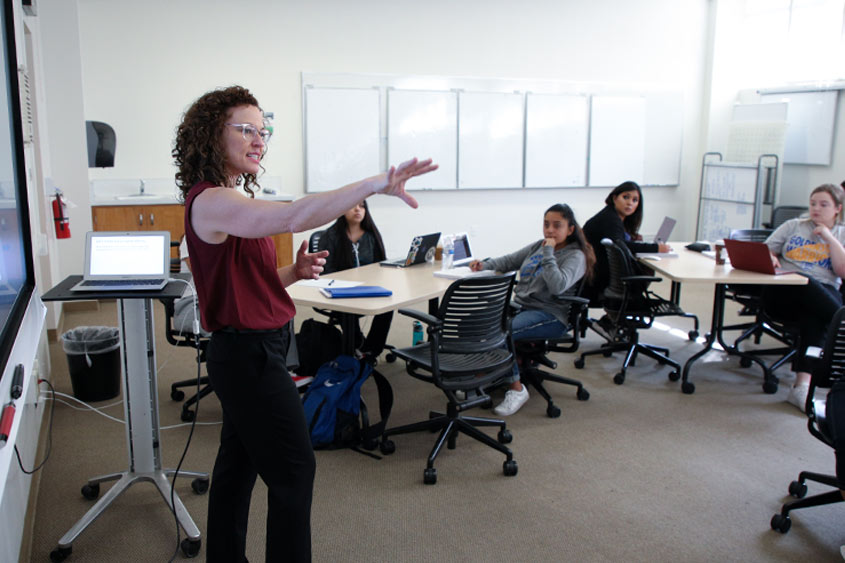 How can pursuing an education help you find your voice — and how can you use your voice to transform others?

San José State’s Connie L. Lurie College of Education is subverting the hierarchies embedded in higher education, primarily “systemic racism that has historically prevented full inclusion and equity for our BIPOC (Black, Indigenous, People of Color) students, staff, and faculty,” one initiative at a time. Starting in 2018, Dean Heather Lattimer invited students, staff and faculty to participate in a year-long strategic planning process to brainstorm innovative ways to disrupt education. How could each department, from Teacher Education to Communicative Disorders and Sciences, create an environment that promoted inclusivity, diversity and anti-racist thought?

The first step? Listening. Listening to our teachers, undergraduates, graduate students and staff as well as educators working in the field, researchers and policymakers. Listening to lecturers like Marcella McCollum, ’05 MA Speech Pathology, ’22 EdD, who not only volunteered to serve on the strategic planning committee but also proposed a minor in Transformative Leadership in partnership with Rebeca Burciaga, professor of educational leadership and Chicana and Chicano Studies. 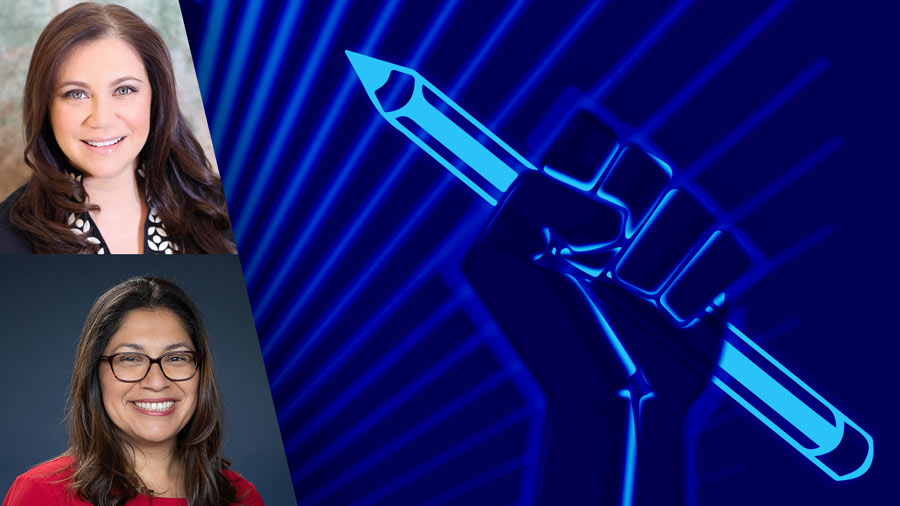 “We need to think about changing paradigms,” says McCollum. “We cannot just offer a class or textbook that tells you how to overcome the challenges that exist in our current educational systems as they are designed. We want students to question why things are the way they are. We want them to have the tools, so they can push back when something looks unjust.”

Throughout the year-long process, the strategic planning committee interviewed students, gathered research and collaborated to update the college mission. The committee created an identity statement and formed four strategic pillars — community engagement, cultural sustainability, holistic approaches and interdisciplinary collaboration — which unites the college’s work across departments. Faculty, staff and students were then invited to submit grant proposals for endeavors that aligned with those pillars.

Luz Nicacio, ’21 Child and Adolescent Development, provided key insight as the only undergraduate on the committee who helped review grant proposals, provide feedback to those submitting ideas and select those that would be awarded funding.

“I saw how influential my voice was in deciding the college’s direction,” she says. “Being on the committee showed me that my college values the opinions of its students and does care about us.” 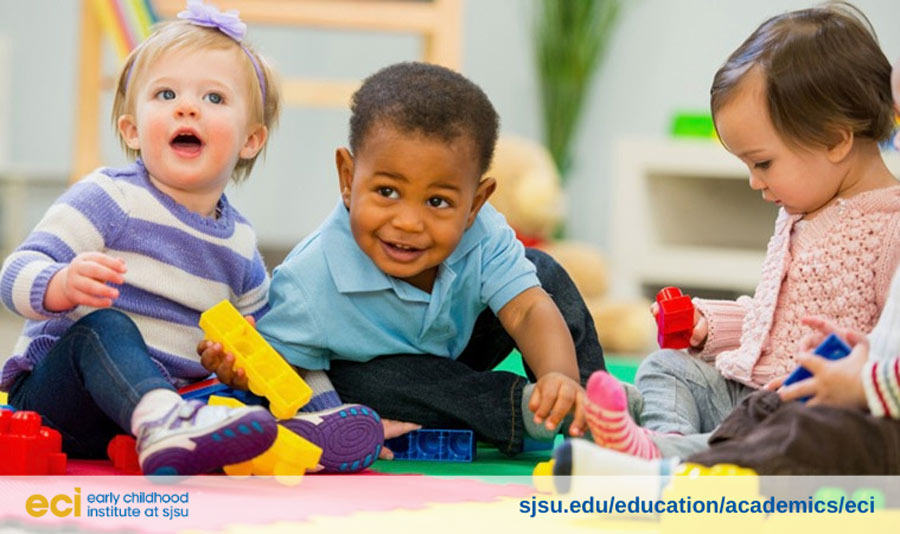 Several projects were funded during the first two years of the grant program. A cross section of them include Early Childhood Connections, a student-alumni network founded by the Early Childhood Institute; the Healthy Development Clinic, a cross-department collaboration to create a wellness clinic at a school site; the Queer Educators and Counselors Network, a professional learning community; and the Institute for Emancipatory Education, spearheaded by Burciaga, among others.

The daughter of a prominent Chicano muralist and an educational administrator, Burciaga grew up on the Stanford University campus, where she observed the opportunities that college afforded — and the inequities it sometimes created, especially among communities of color. As an academic and professor, she set out to find creative ways to subvert the hierarchies embedded in higher education.

“My first experience that piqued my interest in education was seeing first-generation college students, primarily Mexican American and Latino students, come to college campuses and find a home. What if we started connections earlier?” she says.

As a professor focused on leadership development, she sees opportunities to reframe traditional notions of school leaders. That’s why she was eager to partner with McCollum in creating the Transformative Leadership minor.

“What I’ve noticed in educational leadership is that we have a lot of students who didn’t necessarily want to be school principals but who really wanted to make changes in their schools,” Burciaga adds.

Their target audience? Undergraduate students who want to develop the leadership skills required to investigate and rethink educational systems: What works, what doesn’t, and for whom?

“This minor is not about positional leadership — there are lots of programs that focus on getting you to management,” says McCollum. “When we interviewed students and asked them to identify a leader, many of them said their mom. This program emphasizes that they don’t have to be a positional leader to change the world.”

In addition to her work with the Transformative Leadership minor, Burciaga leads the Educational Leadership MA program and serves as the faculty executive director of the Institute for Emancipatory Education (IEE). All of these programs share a commitment to equity, social justice and redefining the future of education.

“The IEE is really grounded in the idea that people should be active participants in transforming their own world and their own social conditions,” says Burciaga.

She adds that because educators often feel pressured to “teach to the test,” it is increasingly important that they be free to revamp educational approaches. “What would it look like if we were able to untie their hands and emancipate their power to teach?”

Perhaps, McCollum suggests, if educators had the freedom to reimagine the way they teach, they could expose their students to career pathways that they might not have otherwise considered.

Had it not been for SJSU Emerita Professor of Communicative Disorders and Sciences Gloria Weddington, who hired McCollum not long after she’d graduated from the University of San Francisco, she may have never considered speech pathology. Originally, McCollum had her sights set on becoming a family therapist. She wanted to help vulnerable children — those who had been abused or neglected, who faced homelessness or food insecurity, or whose parents were incarcerated. She was unfamiliar with speech pathology, in part because she’d never seen a person like her, a bilingual professional, in that role.

“One day, Gloria said, ‘What do you think is the most powerful thing you can give those children? Maybe it’s the ability to tell their story,’” McCollum remembers. “She told me about a grant for bilingual educators and encouraged me to apply for SJSU’s master’s program in speech pathology.”

McCollum hopes that by transforming the landscape of educational leadership, she can encourage students in her classes to mentor their future students or clients much in the way that Weddington did for her — by recognizing potential and creating opportunities for those who historically have been excluded.

Because the strategic planning process began before the COVID-19 pandemic, many of the projects had to evolve. When it became clear that the pandemic would stretch beyond the initial two-week lockdown, the college launched the K-12 Teaching Academy in summer 2020. In an era when most teachers had limited training on how to teach online, the free webinars offered practical tips for anyone, anywhere.

By bringing together experts who could speak to the challenges facing educators during the pandemic in real time, the project drew on the college’s four pillars — community engagement, cultural sustainability, holistic approaches and interdisciplinary collaboration. Feedback poured in from across the nation: The webinars have been viewed over 25,000 times and highlighted on ABC7 News, EdSource, and the COVID-19 CA website.

The IEE offered a similar online seminar series in early 2021 with a special focus on emancipatory education and anti-racist pedagogy.

“There’s space growing for us to collaborate, and it’s on the back of the pandemic and last summer’s racial reckoning,” Burciaga says, referencing the murder of George Floyd and subsequent national dialogue.

“A lot of this work could not have happened without the push from Black Lives Matter. I’m mindful of the times that we are in and who this work really rests on.”

Dean Lattimer adds that the programs introduced through the strategic planning process “are intentionally designed to engage students as current and future leaders who will draw strength from their own lived experiences to make much needed transformative change in our society.”

“Between the master’s programs and the leadership minor, our modifications to teacher education and our conversations about who is being hired to teach and enact change, I really think that what we are doing is foundational,” says McCollum. “It has the potential to shift the foundation of education.”