A Tale of Two Photographs 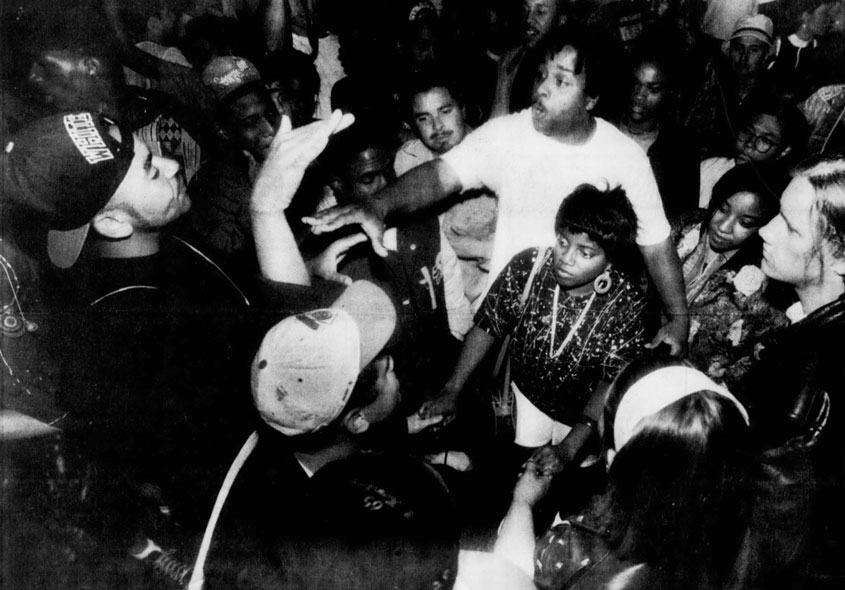 Front cover image of the Spartan Daily on May 1, 1992. Photo: Marcio J. Sanchez.

The first, a black-and-white image taken from above, shows a huddle of student protesters. In the center, a young Black man holds his arm protectively around a Black woman, one arm outstretched as if responding to a white man in a backwards baseball cap.

It was Friday, May 1, 1992, days after the police officers accused of assaulting Rodney King in Los Angeles were acquitted. As Spartan Daily reported, protesters took to the streets, not only in Southern California, but across the country, and at San José State University, where Sanchez was studying photojournalism.

Having seen the infamous video footage of King that ignited a national dialogue about police brutality, Sanchez dropped what he was doing and immediately traveled to LA to capture history in action.

Born in Honduras, Sanchez and his family had moved to Lynwood, a community not far from Watts, where the LA riots began in the hours following the acquittal. Motivated to witness the truth, Sanchez slipped into the crowds with his camera, snapping many photographs like the one that later made the Spartan Daily front page.

“Those pictures made my career,” says Sanchez, ’07 Photojournalism. “Those pictures helped me secure an internship. I received some local awards for the coverage. That was my kickstarter. I realized then that this was the kind of work I wanted to be doing.”

Not long after leaving SJSU, Sanchez accepted his first full-time job as a photographer for the Kansas City Star, where he stayed for seven years. Over the years, his work has been published in The New York Times, USA Today, Sports Illustrated, Newsweek and National Geographic. In 2002, he became a staff photographer for the Associated Press.

Whether he was covering wildlife preservation in Africa, Hurricane Mitch in Honduras, baseball in the Dominican Republic, the Super Bowl in the United States, the 2010 Winter Olympics in Vancouver or the 2010 FIFA World Cup in South Africa, Sanchez resolved to use his camera to accomplish one main goal: to inform the public — to be the people’s eyes.

“The role of the photojournalist is to be a complete storyteller without any bias,” he says. “It is very important, especially in a politically charged situation, to not take sides, to work in an emotion-free environment. You have to let the situation tell its own story without you explaining what you perceive.”

The frame that changed everything

This ability to produce quality work under pressure came in handy in July 2020, when Sanchez joined his colleagues in Portland, Oregon, to cover Black Lives Matter protests following the murder of George Floyd.

At the time, President Donald Trump had sent federal agents to Portland until, as he described, city officials “secured their city.”

What Sanchez saw was more like mayhem: molotov cocktails, commercial-grade fireworks and canned beans were being thrown over the concrete fence that separated protesters from the Mark O. Hatfield United States Courthouse, and federal agents were spraying rubber bullets and chemical irritants. At one point, he was pepper-sprayed in the face.

It was in the aftermath of this scene that he took his award-winning image. It features a bald woman in a gas mask, glasses, tank top, jeans and sandals propped against the concrete fence. There is a cloud of what looks like tear gas in the air and a poster that reads “Black Lives Matter” above her head.

My image from #pdxprotest which was part of the @AP winning team entry for this years @PulitzerPrizes pic.twitter.com/8L1PQ06m4Z

“It was, technically speaking, a difficult picture to make,” says Sanchez. “It was my fifth or sixth day covering the protests and it was almost pitch dark. I had to stretch the capabilities of my camera to take the photo.

“The positioning of the woman and everything around her immediately caught my eye. She was surrounded by a lot of screaming, yelling and commotion. I don’t think she was trying to shield herself from gas or smoke so much as create a gesture to say that she was a peaceful person amongst the chaos. I had the opportunity to capture what I thought was a very pointed moment in a chaotic environment.”

Sanchez says that the AP was one of the only news outlets to access the federal building that day. Their team captured what it felt like both from the protesters’ and the federal agents’ perspectives.

“I was aware of the responsibility that I had. We were the only group that was able to tell the story from both sides.”

Not only did his image tell a complex and compelling story, it made history. His photograph, along with work by his AP colleagues Noah Berger, Alex Brandon, Ringo H.W. Chiu, Cortez, Frank Franklin II, David Goldman, John Minchillo, Mike Stewart and Evan Vucci, won the Pulitzer Prize for Breaking News Photography in June 2021.

“The Pulitzer Prize is beyond my wildest dreams,” Sanchez says. “We are at the forefront of history as photographers. I don’t do this for awards; my main satisfaction comes from informing the public.

“When you think about people who have won the prize, it’s John F.  Kennedy, Mark Twain, Ernest Hemingway, and, now, little old me. This is the company we’re in, alongside the greatest journalists in history.”

Sanchez is the first Honduran-born journalist to win a Pulitzer. This significance is not lost on him.

“I remember my childhood friends having to flee their country and seek asylum in the U.S., many of them working professionals who had to start over because of all the strife back home,” he says. "Seeing how proud my countrymen are gives me a sense of national pride that I am from there.”

Reflecting on his career, he can’t help thinking about those early days covering the King protests as a student at San José State. He credits his photojournalism professor Jim McNay, who often brought professional photojournalists to campus, with laying a critical foundation.

“I did not realize the full transformation that SJSU made upon me until I saw the tweet from President Papazian, congratulating me [on winning the Pulitzer] and saying ‘Spartan Up,’” he says. “I had the utmost professional direction at San José State — professors who said, ‘Follow this blueprint and you’ll be successful.’”

“A few months after graduating, I landed my first full-time job at a major metropolitan newspaper. So what does that say? It says that San José State prepared me right away, right from the moment I stepped off the stage at Tower Hall. Things have come full circle.”